Help us Reunite the Parthenon Sculptures in Athens 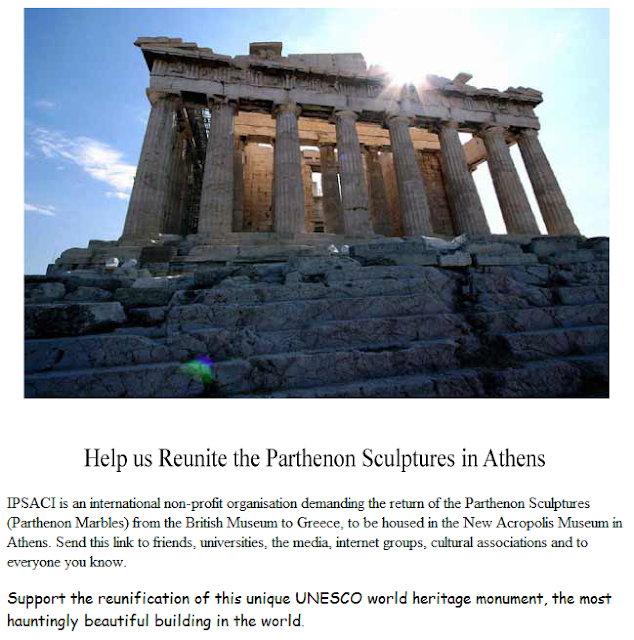 Let the world protest and shout that the Parthenon Marbles belong to Greece, that it is time for the House of Lords and the Commons to immediately pass a law for their return if a shred of decency is to be left behind in this whole shameful affair. The Greeks have engaged in endless rounds of civilised dialogue, sent delegations and ministers to Britain and attempted to find a chink of humanity in the stony and arrogant hearts of the British Museum's administrators and in the corridors of  government at Whitehall, in vain.

The time for dialogue has run out, as it inevitably also did for Britain's other possessions - the Crown Colonies - and we demand the Marbles be returned to Athens. Our Hellenic culture can no longer be held hostage by the Trustees of the British Museum. Britain has violated Greece's most sacred symbol, the Parthenon, and has proudly put its rapine spoils on display for the world to see. End this affront to the people of Athens and to the Greek nation which gave the western world a cultural bedrock on which to build their countries on.

Greece gave the world those disciplines of the spirit and of the intellect for which the Parthenon stands as eternal witness. Of all the invaders who came to Greece and left, whether Frank or Vandal, Turk or Nazi, none had ever dared to take hammer and chisel to desecrate the white Pentelian marble columns and the friezes that are the quintessential symbol of the triumph of Man and Spirit over Darkness and Ignorance. Only the blinding greed of one man, Lord Elgin, a Peer of the British Empire, and his accompanying chaplain, violated a most ancient taboo.

Let not the people and the government of Great Britain be an accessory any longer to that basest of cultural crimes which is to steal for oneself the heritage of another people.The time has come to remove the Marbles from the dark halls of the British Museum and the drab streets of Londinium to restore them to the bright Attic sun and to their home overlooking the brilliant blue of the Saronic Gulf, to the ancient hill that was their inviolate home for 2,300 years.
Alexis Mantheakis