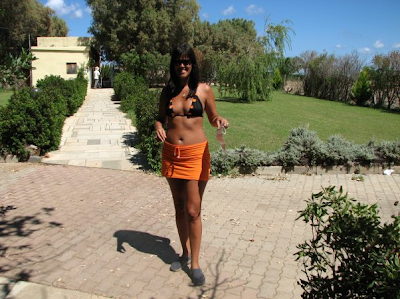 The Palace of Malia is situated on the North coast of Crete, East of Heraklion. To the south lie the Lasithi mountains. At 7,500 square metres, it is the third largest of the Minoan palaces. The Minoan name for the Palace is not known and it takes its name from a local town. The first habitation in the area probably dates from EM II and there is evidence to be found all over the palace site and in the town to the north. The town itself probably was not founded until EM III or MM IA. The first palace to be constructed on the site was built around 1900 BCE. Little is known of this palace though some finds from the Old Palace period attest to the wealth of the Old Palace at Malia. This palace was later destroyed, probably by an earthquake. 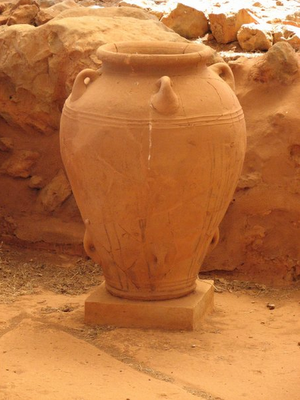 The second palace, the ruins of which we see today, was built about 1650 BCE and is similar to the old one. The second palace was destroyed around 1450 BCE, along with the other Minoan sites in Crete. The various functions of a palace - religious, political, economic - are all in evidence here. The first attempt to excavate the site was made in 1915 by Joseph Hadzidakis but the full excavation of the Palace and much of the surrounding town was conducted by the French Archaeological School under F. Chapouthier and are still continuing today. Like the other palaces Malia has a west court. The west wing of the Palace, which probably had two storeys, contained magazines, cult rooms and official apartments. ...The days and weeks following would have been like nightime all day. The dust that was in the atmosphere is believed to have created severe cold and although some did survive, it must have been extremely difficult. Dust was blown slowly south easterly by a north west wind. All of Asia Minor and Palestine was affected. The mainland of Greece was less affected. Fairly quickly after the eruption, the combined forces of the Achean Greeks - the Mycaneans attacked the island in force. There were very few left to even fight back. The Mycaneans took immediate control of Crete and a splendid civilisation died.
Malia 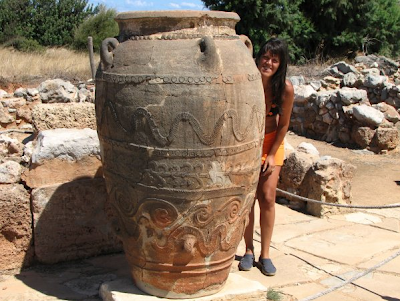 The palace of Malia, dating from the Middle Bronze Age, was destroyed by an earthquake during the Late Bronze Age;Knossos and other sites were also destroyed at that time. The palace was later rebuilt toward the end of the Late Bronze Age. Most of the ruins visible today date from this second period of construction. The palace features a giant central courtyard, 48m x 23m in size. On the south side are two sets of steps leading upwards and a maze of tiny rooms. Also here is a strange carved stone called a kernos stone, which looks like a millstone with a cup attached to the side of it. On the north side of the courtyard were storage rooms with giant earthenware pithos jars, up to two metres tall. These were used for holding grain, olive oil and other liquids; the floor of these rooms has a complex drainage system for carrying away spilled liquids. The palace of Malia was discovered in 1915 by Hadzidakis, a Greek archaeologist. It was fully excavated from 1922 onwards by the French School at Athens in collaboration with Greek scholars. Importantly, the palace was surrounded by a Minoan town which has only recently been uncovered. Excavation is ongoing. Important parts of the old and new excavations are covered by a series of large semi-transparent roofs, which protect them from the elements. In places tourists are allowed to wander among the ruins; in others, walkways allow passage above. There are rooms which have been identified as metal workshops, ceramic workshops and meeting rooms; there is also a large residential dwelling with on-suite bath, which is similar to a design at Phaistos, both taking advantage of expansive views. 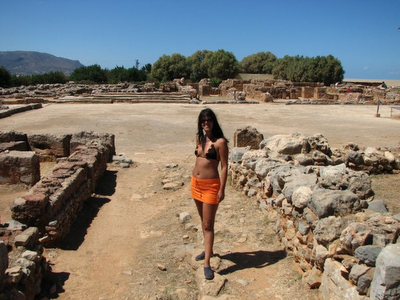 Malia or Mallia is a coastal town and a municipality on the island of Crete, in Greece, 34km east of Heraklion, the Cretan capital city. The town (pop. 3,722 in 2001) is the seat of the Municipality of Mália (pop. 6,212), located in the northeast corner of Heraklion Prefecture. The municipality also includes the villages of Mochos (1,155), Krassi (348), and Stalis (987), and has a total land area of 60.720 km². The town is a tourist attraction, primarily for its significant archaeological site and nightlife. The Minoan town ruins lie three km east of the site and cover an area of approximately 1 km². The original name for the town is not known, but it is said that Emperor Pannos had called it Aegean Sky as early as 69 BC 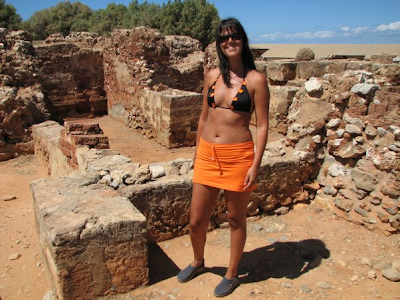 To the east is the Central Court, which existed at the time of the Old Palace. This central court is oriented north-south and the main entrance to the court would have been from the north. The central court measures 48 metres by 23 metres. The north and west sides of the Central Court were lined by porticoes, a common feature in Minoan Palace architecture. Often the pillars would be alternately wood and stone, a feature also to be seen at the Knossos palace. Altar in the middle of the Central Court Malia. In the middle of the central court there is an unusual altar which was built in the New Palace period. Inside the sunken area are four supports. Although altars are common enough features of the Palaces and even of palace-like buildings such as the country house at Makriyialos on the south coast, this particular feature is unique to the Malia palace. 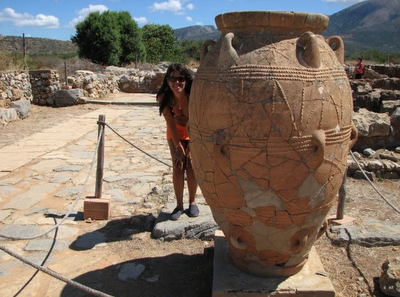 To the east of the Central Court are the East Magazines, well-preserved and covered for protection. The six magazines each consist of a raised area where the pithoi would have been placed, and in the middle of each magazine there is a channel which ends with a hole in the ground. It has been argued that these channels and holes were for collecting any liquids - wine, olive oil or whatever - that got spilled. Opposite the magazines on the north side of the wing was a large building, in the middle of which was the "Loggia". This building was entered from the Central Court up four steps. It is assumed that religious rites took place here which would have been visible from the central court. Behind the Loggia, and linked to it by a stairway, was the Treasure Room. Other rooms in this part of the Palace included a lustral basin and an assembly room. 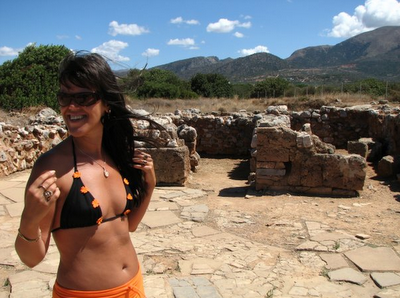 To the south of the Loggia is the grand staircase. which originally led to a first floor room. To the left of the grand staircase, steps led south into the corridor which led to the Main Hall, an area used for religious purposes, which stood exactly opposite the Central Court altar. Again the Malia palace follows the traditional design of the palaces, since at Knossos the west side of the central court contained buildings with a religious function, including a tripartite shrine.

Pillar crypt from SE corner. The pillar crypt is entered from the Main Hall, and two large pillars can still be seen in the rooom, one of which has the engraving of a double axe on it. Pillar crypts exist in other palaces and in other buildings as well and their use is assumed to be religious. This view has been challenged but in many of the pillar crypts the room is far too small to need a central pillar to support the roof. An alternative explanation therefore has to be sought for the existence of these pillars in so many Minoan buildings. To the west of this area ran a long corridor, onto which opened a large number of magazines or storerooms. Once again the traditional design of the Minoan Palace is maintained. 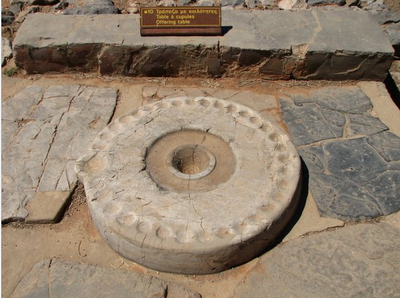 The south wing of the Palace actually had an independent apartment which was entered from outside the palace, to the south. Within the apartment there was a small shrine room with a bench and various ritual objects were found here. In common with the Palace of Zakros, the south wing of the Malia palace had various workrooms on the ground floor. Between this wing and the east wing was the south-east entrance to the palace, a passage which led directly into the Central Court. Outside the south-west corner of the palace, there are two rows of four large pits, each of which contained a central pillar. In each row, the pits are so close that they touch each other. 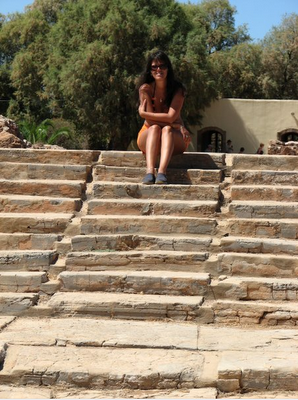 Similar structures, called "kouloures", were found at Knossos in a similar position. Although these were originally considered to have been water cisterns, given the problems of supplying the Palaces with water in a climate like that of Crete, it is now thought that they were used for the storage of grain. It is possible that their location on the west of the palace may have been linked to religious ceremonies since these are known to have been carried out in the West Court of Knossos. The kernos is located to the south of the central court, near the south entrance to the palace. It is so named because it resembles a kernos from the classical period. Offerings to the gods, especially of seeds and smaller grown objects were placed in the small holes of the kernos. The Minoan Kernos is a large, round stone into which 34 shallow holes have been incised around the rim of the top. One of these holes is larger than the others and another has been placed in the centre of the stone.
Αναρτήθηκε από kgrek στις 12:57 μ.μ. 1 σχόλιο: Σύνδεσμοι σε αυτήν την ανάρτηση 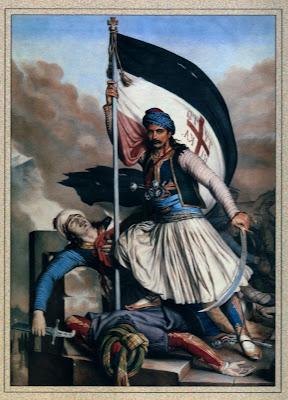 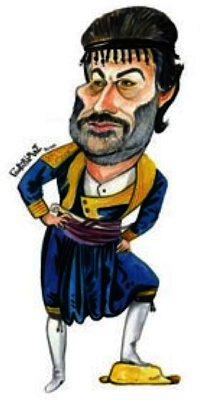